The Council on State Governments put out this handy resource regarding Medicaid match rates and how states will fare with the expiration of the enhanced ARRA (Federal Stimulus) match rate.

This is timely for those of us closely watching the Kentucky General Assembly grapple with filling the $166 million Medicaid deficit in special session. This deficit was caused mostly by the gap in ARRA expected funding and the reduced amount that Congress actually sent the states including Kentucky.

Some of the most helpful information in the CSG post was this spreadsheet showing the match rates by quarter, here are Kentucky's:


The other interesting chart was this one showing Kentucky as one of only 17 states that will have a better match rate in 2012 than in 2008. 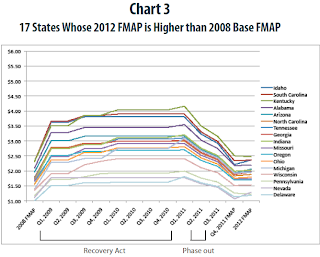 More resources to come and thanks to CSG for the info.
Posted by dustin.miller10 at 11:46 AM