The Governor’s budget, with its reliance on gaming revenue was dead on arrival with both the House and the Senate.  For the first time both chambers will be working simultaneously to develop a budget.  The Governor’s budget included 780 million in gaming revenue and with the new dollars he still cut state agencies with the exception of elementary and secondary education 2% and granted teachers and state employees a 1% pay raise only if additional federal stimulus dollars come from Washington.
We think this creates an environment where the legislature will seriously begin to consider tax reform or tax modernization.  Begin to consider is the operative phrase here.  With the November elections and most incumbents drawing opposition, anything having to do with taxes would be difficult if not impossible to consider or pass.  The House will present a bill for consideration and we believe the result could be the development of a structure to begin to review and consider the state’s tax system for either a special session after the November elections or sometime next year.
The leadership in both the House and the Senate has said they would be willing to look at tax reform as a way to generate more growth in revenue.  Both have said they would like the state tax system to become more consumption based.  Speaker Stumbo has asked a working group of legislators to draft a bill that would repeal the corporate income tax, repeal exemptions to the sales tax, apply the sales tax to services and create an earned income tax credit for the working poor.  In looking at the sales tax exemptions, he has asked them to consider those exemptions that do not impact working families.  On all other exemptions, many of which will impact businesses, the Speaker says they will start from scratch and expect those groups that benefit to come before the General Assembly and justify the exemptions.
Here is some general information on the sales tax exemptions and how they relate to business.  The sales tax is currently 6% and there are 57 exemptions not counting services.  The 57 total about 2.5 billion annually, but six of the 57 make up 1.8 billion and those six would be the hardest to repeal—food, education charity and religious institutions, labor or services used in property , residential utilities, prescription medicine and cities and counties.  The full list of exemptions is included as an attachment.
The largest category of the sales tax that would impact our business and customers would be a new tax on services. The total if all services were taxed is 1.7 billion, but 584 million is estimated for health care which you would expect to be excluded from the list.  Some of those services that would be most associated with businesses are listed below and would total 578 million.  The complete list of what the state considers as services is also attached.
·         Business services (specialized design, computer systems design and R&D ) total 250 million;
·         Advertising—36 million,
·         Professional services—109 million
·         Engineering, accounting, research and management—183 million
We think you need to have your folks begin to think about the impact of losing some of the exemptions and of having the sales tax applied to various services.  Obviously it will impact everyone differently.
Download:  Sales Tax Exemptions
Posted by dustin.miller10 at 8:57 PM No comments:

Here is our summary of the Governor's Budget Address from this evening. To see the various news articles on the budget proposal click HERE.


In his budget address tonight, Governor Beshear laid out his plan for dealing with a $1.5 billion shortfall and outlining his spending priorities for the next biennium.

Beshear's plan for dealing with the budget shortfall relies on over $700 million in new revenue from expanded gaming at Kentucky horse tracks. This option was one of three that the Governor considered to deal with the shortfall. The second option was for drastic cuts in the already depleted state budget; 12% the first year and 34% the second year.  His third option was to raise taxes, which he was unwilling to do.

Even with the gaming revenues, Beshear's budget plan still relies on cuts to state government to deal with the shortfall. He proposed a 2% cut to most state agencies, many of which have already been cut up to 12% over the last year.

Even with the gaming funds this proposal includes many expenditures of one time money for recurring programs.

The funding priorities the Governor laid out include the following:

- Primary education funding, the SEEK formula, was not cut under his proposal.

- $150 million in bonds for school construction

- Reducing premiums for KCHIP to get more children enrolled

All told, the Governor tried to entice support for expanded gaming and the revenues it produces by basing his budget proposal on those revenues. Without the gaming revenues, the budget would likely include massive cuts to education and state programs that would be visible to the average Kentuckian.

Politically the Governor has thrown the ball to the General Assembly and said if you don't want to pass expanded gaming, then you will have to make the deep cuts to education, health services, corrections, and public safety. Not to mention no new roads or schools. Since he was unwilling to propose new taxes and make the deep cuts to state services this may have been the Governor's only or best option at this point.

We will put out a more detailed analysis of the budget proposal in the days ahead; you can access the full text of the speech HERE.

Receipts to General Fund down 8.3 percent

Receipts to General Fund down 8.3 percent: "

Receipts are now down 4.6 percent for the first half of fiscal year 2010, she said. Projections call for a 2.7 percent revenue decline for the year. To meet that forecast, revenue can decline only 0.8 percent over the last six months of the fiscal year.

'December's negative revenue report is a stark reminder that recessionary economic times continue to prevail,' Lassiter said in a statement.

This week, Gov. Steve Beshear announced that he would plug a $108 million budget shortfall for the remainder of this fiscal year, which ends June 30, with a combination of 3 percent spending cuts in some state agencies, transfers from other funds and the use of one-time federal stimulus money." From the Herald-Leader
Posted by dustin.miller10 at 9:50 PM No comments:

State of the Commonwealth Address

Governor Beshear delivered his State of the Commonwealth Address tonight with an emphasis on jobs and bipartisanship. He outlined several initiatives he wants the legislature to tackle including: medicaid coverage for smoking cessation, stronger domestic violence laws, and changes to the higher education system.

The one noticeable absence from the Governor's remarks was no mention of expanded gambling at Kentucky horse tracks. The Governor has been a strong advocate for expanded gaming legislation as it was the main issue he campaigned on when he ran for Governor.

The Governor will be back before the legislature in two weeks for the Budget Address where he will present his budget to the General Assembly.

Full Text of Beshear's Written Remarks
Posted by dustin.miller10 at 10:08 PM No comments:

Back to Frankfort Reception!!! 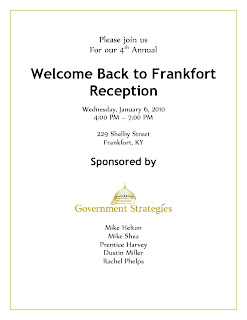 Stop by our Open House on Wednesday, January 6, from 4:00-7:00 p.m. before the Governor's State of the Commonwealth Address. Plenty of food and drink to be had!!!
Posted by dustin.miller10 at 9:25 AM No comments: